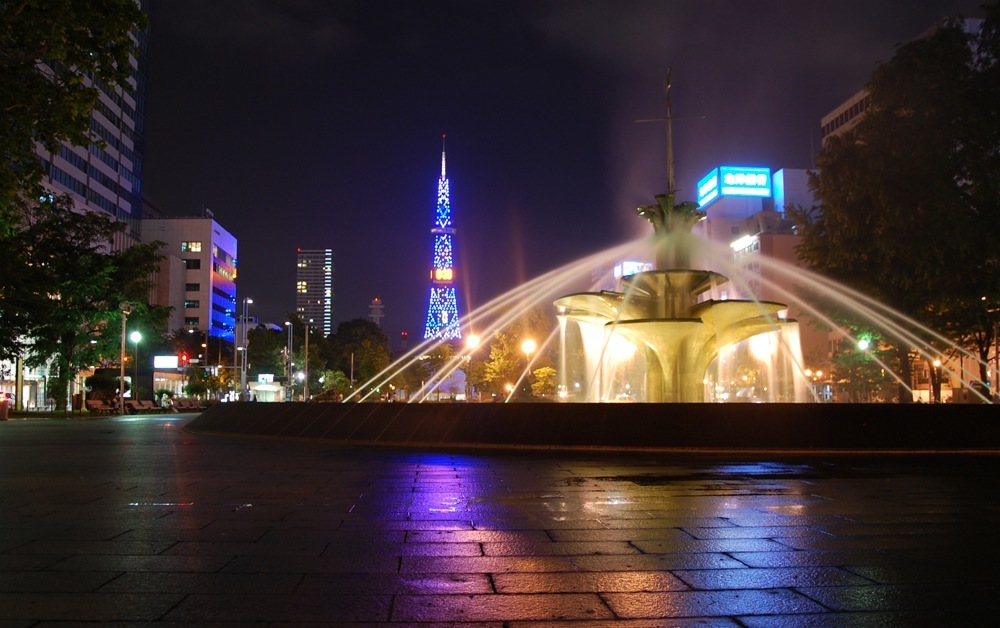 Anybody familiar with Sapporo knows that Odori Park is the place for downtown summer action. For those unfamiliar with the city, the park stretches across the center of downtown like a thick belt over the belly of central ward. From the TV Tower to the Sapporo City Archive Building on west 13, it’s a well-loved oasis of greenery among the municipal offices, business buildings and upscale apartments.

February’s internationally renowned snow festival is the greatest cold-weather attraction to the park. Each year the sculptures grow, some becoming works of multimedia engineering when paired with lights and music. Despite the freezing temperatures, thousands throng to view frozen pieces of art.

But as soon as the snow melts, a season of scaffolding, tents and tables unfolds to accommodate the myriad events scheduled to go off. First and foremost is the throbbing song and dance of Yosakoi Soran Festival, held in early June. The greatest concentration of hot-weather revelers occurs at the Odori Beer Garden (held mid July to mid August), Sapporo’s celebratory nod to the sudsy outdoor watering holes of its German sister city. For three weeks, tens of thousands of residents and tourists alike imbibe in the beverages of Japan’s famous breweries.

The beer garden, which dominates the park from the 5th to 10th block, is the quintessential opportunity to enjoy Hokkaido’s short, but action-packed summer. In a demographic ranging from college kids to company seniors and everyone in between, the beer garden attracts guests eager to down cold brew under the hot sun. Although tamer than in previous years, a Bacchanal atmosphere of merriment permeates the air, inciting strangers to toast, exchange phone numbers, and sometimes wander off together.

As temperatures plateau and then begin to wane after Obon, the detritus of the beer garden is quickly swept away to make room for September’s Autumn Festival (mid September to early October). Occupying the same space as the previous event, this function assumes a cooler, more sophisticated air. Wine bottles and whiskey high balls replace beer towers; paper bowls of edamame are passed over for plates of oysters and the crowd takes a decidedly adult slant.

The Odori Autumn Festival is little over two weeks, lasting from September 10th the 28th, however growing attendance numbers suggest extended operations in upcoming years. Prices are reasonable, although unlike the beer garden a choice bottle of wine could run you over $50. Gone are the previous month’s t-shirts, skirts and sandals. Attendees are quick to wrap themselves in the newest fall fashions, wearing colors more in tune with the changing leaves that rustle above them.

Bacchus may be king of the summer, but in the fall Odori Park is Epicurus’s dominion.  Say hello if you see me there next year: I’ll be the tall American with a bottle of red and some grilled Hokkaido venison on his table.